"After activists and supporters of Animal Friends [Croatia] gave their support to the Ice Hockey Club Medvescak Zagreb during numerous home games of the regional league EBEL against Slovenian, Hungarian and Austrian teams by unfolding a large several meters long banner reading "ANIMAL FRIENDS ADORE THE BEARS," the bears payed them back for their support for the "For Croatia without Fur" campaign – by undressing their representative!

Luka Novosel, the 26-year-old defender of Medvescak, undressed exclusively for this occasion for the new Animal Friends' campaign in order to draw attention and point out the suffering of animals for their fur. After model and journalist Fani Stipkovic and singer Luka Nizetic, the hockey player Luka Novosel thus joined the 'For Croatia without Fur' campaign and became the first athlete in Croatia who went naked for animals." 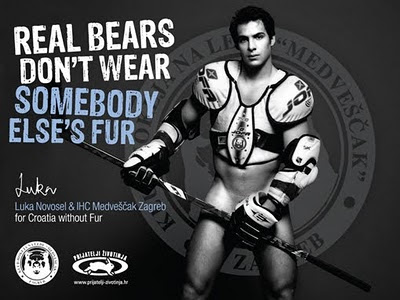 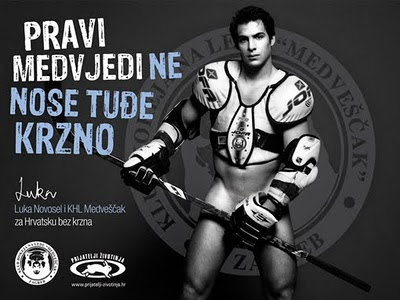